By age 30, Epic Games Inc. founder and CEO Tim Sweeney had a couple of successful videogames under his belt and was starting to make real money.

“I had a Ferrari and a Lamborghini in the parking lot of my apartment,” he recalled. “People who hadn’t met me thought I must be a drug dealer.”

Today, Mr. Sweeney, at 48, is worth more than $7 billion, according to Bloomberg’s Billionaires Index. Epic was last valued at $15 billion, counting

and China’s Tencent Holdings PLC among its investors. And “Fortnite,” its blockbuster game, has racked up 250 million players and $3.9 billion in estimated revenue.

Mr. Sweeney is a tech giant, but he remains a little-known figure.

“I’m single. Unmarried, no kids. So I lead a fairly simple life,” he said. In his spare time he programs or hikes. “I love going off the trail and finding things that I think nobody’s ever seen before,” he said.

What role has videogaming played in your life? What is the next big leap in videogames going to be? Please join the conversation below.

Mr. Sweeney has long since shed his passion for luxury vehicles. He now puts his money toward nature-conservation efforts. He’s spent hundreds of millions of dollars to preserve more than 45,000 acres of forest throughout North Carolina.

His favorite food is Bojangles’ fried chicken. (“It strikes the perfect balance between tasty food and time commitment,” he said). He primarily drinks Diet Coke (“but only because it’s almost impossible to find Tab nowadays”). His office uniform is a T-shirt and cargo pants.

While the biggest U.S. videogame companies are clustered in Los Angeles, New York and the Bay Area, Epic is based in Cary, N.C., down the road from Raleigh. Mr. Sweeney said the location prevents Epic from being swayed by Silicon Valley groupthink. The entrepreneur is adamant about one thing: He did not create “Fortnite”; his employees did. He didn’t design or program the game. But under Mr. Sweeney’s stewardship, the megahit has transformed the $130 billion global videogame industry.

Before “Fortnite,” the business was dominated by bankable franchises such as Call of Duty and Grand Theft Auto that people played on

Xbox or a computer for about $60 a pop. A person might play alone, or maybe with a friend or two who owned the same hardware. Game publishers produced periodic installments, like Hollywood sequels, to lure back the faithful.

Epic tried something different. It made “Fortnite” free and put it on every major device people use to play games—consoles, computers, smartphones and tablets. It put its own spin on a trendy new genre called Battle Royale, where a large group of players fight until only one person or squad is left standing. It constantly tweaked the game’s virtual world to give players something new to discover. And it took the popular shooter format and made it less violent and more playful, with colorful characters who compete with dance moves as well as firearms. Still, there was a problem. A player on the most popular console, Sony’s PlayStation 4, couldn’t play with another on Microsoft’s Xbox One.

So for six months last year, Mr. Sweeney called and emailed the heads of the two tech juggernauts, asking them to do the unprecedented and formerly unthinkable—make their systems work together.

“An effort in international diplomacy,” Mr. Sweeney called it. “Given the long-term rivalries, it was a series of contentious discussions.”

Switch machine, which doubles as a home console and portable gaming device. He pushed for the Switch to support so-called crossplay with its rivals, too.

Mr. Sweeney got only part of his wish. Nintendo and Microsoft agreed to the arrangement in June 2018 but Sony demurred. He then shared data with Sony showing that crossplay between PCs and mobile phones, for example, dramatically boosted “Fortnite” engagement. He also turned to

“It was one of the greatest moments in Epic’s history,” Mr. Sweeney said. “I was pleased and tired.”

By erasing the barriers between players with different devices, Epic effectively turned “Fortnite” into a massive social network. Wearing headsets to talk to one another, groups of friends trade jokes and gossip while battling to survive. Malcolm, a character from the Unreal videogame series, stands near the metal slide that connects two floors in Epic Games’ headquarters.

It is “as much a social hangout for a lot of folks as it is a game,” Mr. Sweeney said in a recent phone call, birds chirping in the background as he hiked the woods behind his office while chatting.

People who have worked with Mr. Sweeney describe him as highly intelligent, with a youthful air. Lee Perry, a former Epic videogame designer, recalled seeing Mr. Sweeney jump on a small trampoline in the office and rollerblade around the company’s parking lot. “He’s just a big kid,” Mr. Perry said.

Mr. Sweeney works at a desk in a six-person office with some of the leadership team. “There are a number of similar ‘brain trust’ offices throughout Epic that I visit a lot,” he said. “We find small group offices like this strike the best balance between individual work and group collaboration, versus solitary offices or cube farms.” Epic Games CEO Tim Sweeney, in his office on a recent day, says part of the ‘Fortnite’ appeal is that ‘it’s as much a social hangout for a lot of folks as it is a game.’

Current and former colleagues say Mr. Sweeney shuns formality. Chris Gerhardt, Epic’s chief information officer from 2014 to 2015, said that when he interviewed for the job, a friend at the company passed along important advice: “Whatever you do, don’t wear a jacket and tie.”

Being the CEO of Epic is the only real job Mr. Sweeney has ever had. Growing up in Potomac, Md., with two older brothers, his father was a cartographer for the U.S. government’s Defense Mapping Agency and is now retired. His mother, who died in 2007, was a homemaker and avid gardener.

When Mr. Sweeney was 11, one of his brothers bought him an Apple II Plus computer, and he began programming. “From then on, I knew what I wanted to do,” he recalled. “I spent more hours programming than I think I was sleeping or in school or doing any other one thing in the world.”

Mr. Sweeney founded Epic in 1991 from his parents’ basement, at age 20, funding it with $4,000 in personal savings. He later dropped out of the University of Maryland a few credits shy of a mechanical-engineering degree. “I went from mowing lawns to being CEO of Epic,” said Mr. Sweeney, who got his diploma in 2018.

In its early years, the company had some success with a handful of games, including “Unreal Tournament” and “Gears of War,” that followed more traditional shoot-’em-up formats. 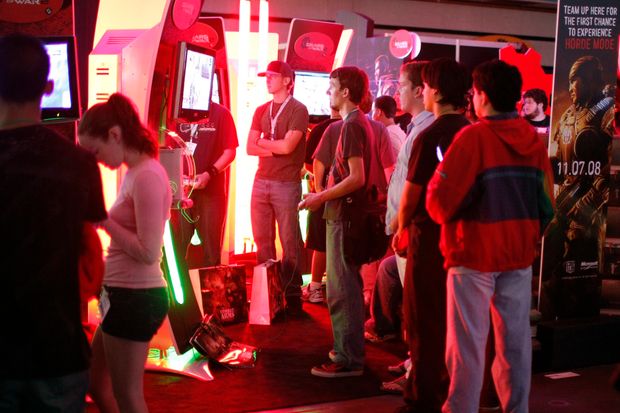 “Fortnite” was born in 2011 out of one of Epic’s occasional “game jams” where developers could experiment with ideas. With a subtitle called “Save the World,” it cost $40 and wasn’t especially compelling because players didn’t compete directly against each other.

No one expected it to be a hit. “The original plan was to go really small with it,” said Mr. Sweeney. “Fortnite” sold only about a million units after it launched in July 2017, a dud by today’s blockbuster-driven standards.

What came next was a series of decisions by Mr. Sweeney and his team that turned “Fortnite” into one of the most popular videogames ever. Epic created a second version, or “mode,” in the Battle Royale genre and made it free.

While many free games make money charging for souped-up weapons and superhero powers, Epic resolved not to charge for things that would help gamers triumph over each other. Instead, Epic sold cosmetic add-ons such as dance moves, in some cases for a brief period, making them must-haves like a pair of limited-edition Air Jordan sneakers, only much cheaper.

Then, Mr. Sweeney brokered the deals that broke down the walls between the videogame console makers. “We felt that basically everybody would be playing ‘Fortnite’ with their friends if there were not a barrier to entry,” he said.

“Fortnite” is a kill-or-be-killed game. But its bloodless, cartoon style (you can play as a banana) was welcomed by gate-keeping parents weary of the hyperviolence in many of today’s games. That wasn’t necessarily a design decision as much as an outcome of Epic’s evolution.

“We recently held a company Halloween party for kids, and we had more kids ever in the Epic office than we had Epic employees,” Mr. Sweeney said. “It’s a reflection of how the company has grown and matured, and how we have different generations of people mixing here together, thinking about what types of games we want to build for the world.”

Epic’s daily restocking of its virtual store and weekly content updates gave “Fortnite” another advantage. It could quickly incorporate player feedback and seize on sudden pop-culture obsessions, such as a hip dance move like The Floss.

“Every week we learn what’s working and what’s not, and we constantly evolve the game,” Mr. Sweeney said.

It all fed the “Fortnite” fever. The game’s hold over kids has sounded alarms, particularly from those who think games are addictive. Not playing “Fortnite”—or even not being good at it—has become a new stigma for some children. Playing with the standard-issue avatar outfit everyone starts with can result in being called “default” or “noob,” modern-day schoolyard taunts.

Mr. Sweeney said Epic strives to make “Fortnite” accessible for everyone. He dismisses the addiction label, though. “It’s unfortunate to characterize having a lot of fun as something more sinister,” Mr. Sweeney said. “You could often say the same thing about playing soccer or watching football.”

Today, “Fortnite’s” dominance is ebbing. Monthly revenue from sales of virtual perks such as costumes and dance moves for players’ avatars has fallen 56% since peaking at a record $372.2 million in December, according to Nielsen’s SuperData. Epic doesn’t disclose financials.

In May, people spent 106 million hours watching other people play “Fortnite” live on

Twitch, data from Newzoo BV show. That’s down from a peak of 149.3 million hours last July. A ‘Fortnite’ gaming competition earlier this year in Katowice, Poland, had hundreds of thousands of dollars in prizes.

With competitors moving quickly to mimic “Fortnite,” Epic is thinking beyond the core run-and-gun experience. In February, 10.7 million players showed up for a live concert in the “Fortnite” world put on by the electronic musician Marshmello, no guns allowed. Epic added a “creative” mode to “Fortnite,” letting players build without the threat of hostile player fire.

The company’s latest endeavor is an online store it launched in December that sells computer games, putting it toe-to-toe with Valve Corp.’s Steam, an influential giant in the PC gaming community. Epic plans to add games for Android devices to it later this year or next.

“I think the thing I’m proudest of is not creating ‘Fortnite,’ ” Mr. Sweeney said, “because I didn’t create ‘Fortnite.’ But I did create and nurture the company that built ‘Fortnite.’ ”